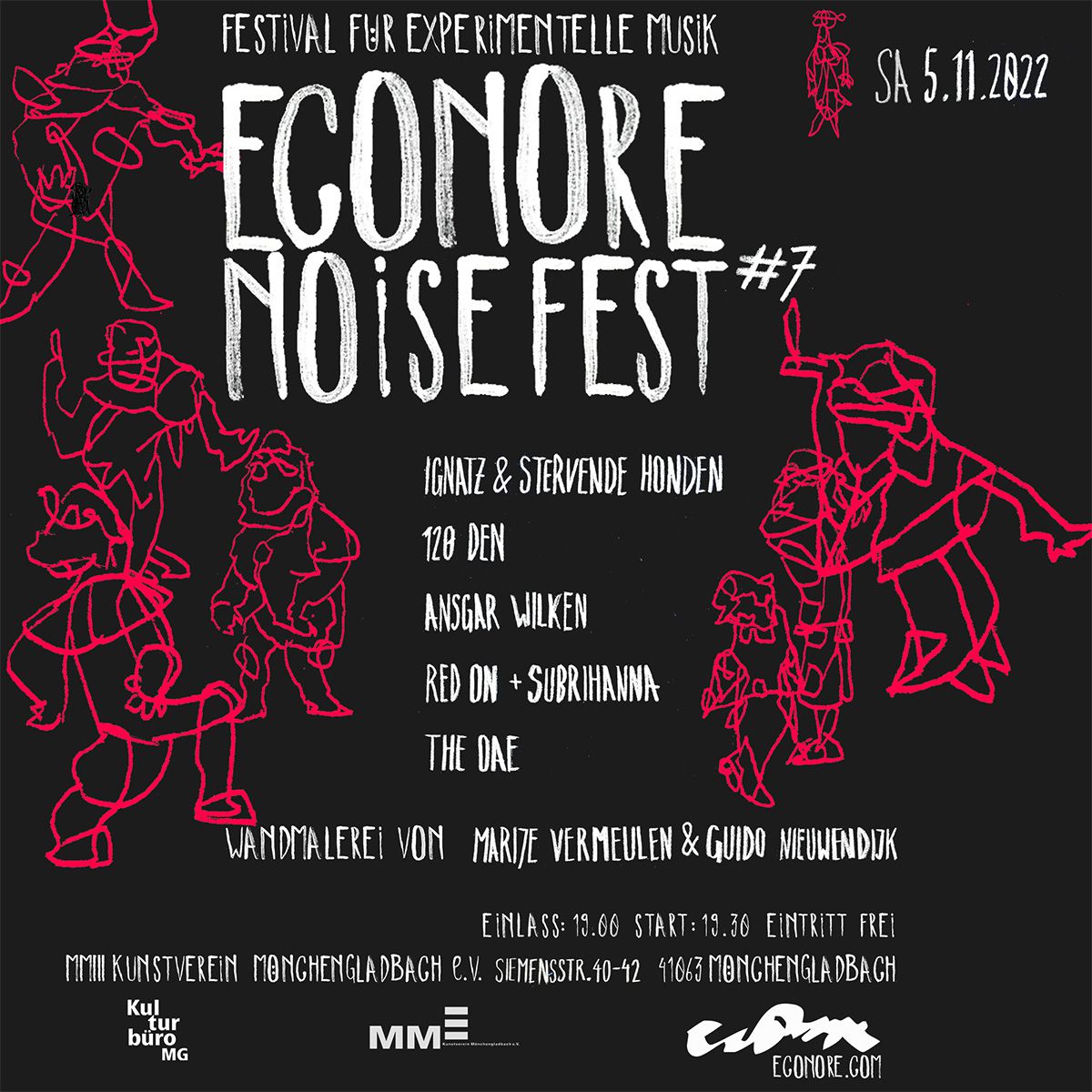 The down-to-earth feminine performance moves on a large scale, incidentally referring to the background of the subtle numbering and giving Rosa Luxemburg a leg up: a spectacular stage show for a wide audience!

The lower the den number, the more transparent and fine the product is. The higher the number, the more opaque the stocking is. Pantyhose with only 8 den are just a hint and particularly finely worked. Opaque are fine stockings with 50 den or more, through which no skin shimmers. 120 DEN are therefore opaque and with the number 120 also refer to the noise character of the musical output: at 120 decibels is the pain threshold of the human ear.

IGNATZ & DE STERVENDE HONDEN
Ignatz is the alter-ego of Bram Devens. With an acoustic guitar and a few effects, he creates his very own style of improvisation-inspired Euro blues.

In 1910, the illustrator George Herriman created the Krazy Kat comic strip. Ignatz, a vicious mouse, was Krazy Kat’s arch enemy, and his favourite pastime was to throw bricks at Krazy Kat’s head (who misinterpreted the mouse’s actions as declarations of love). Belgian artist Bram Devens uses Ignatz as his alter-ego, and comes armed with his own pile of bricks; sparse, emotive songs born of the human condition, wrapped in effects, corroded by tape, driven forth by improvisation and spontaneity.

Ignatz’s songs stem from a familiar stripped folk framework, with Devens’ delivery recalling the louche primitivism of V.U. or Henry Flynt – but these songs sound inverted, cast adrift, their cool touch belying a stymied heat beneath the surface. Where Devens’ fretwork is adorned, it is executed with a refined coarseness. Autonomous loops entwine each other. Songs brush past percussion, bass notes, or a scant keyboard motif. A voice recedes from the heart of the song into a dislocated, cracked drawl.

Apart from working solo, Ignatz plays with his band “de stervende honden” since 2013, after a friend (being tired of Ignatz’s solo concerts) suggested playing with Erik Heestermans and Tommy Denys.

ANSGAR WILKEN
Kitchen sink Avantgardist from Berlin. Prone to melancholy, excitement, excess and pushy modesty at the periphery of D.I.Y, sound and image.

The project Red On by label maker, producer and DJ Philipp Dittmar remains in constant change. Recently, the focus has been more on interdisciplinary collaborations and larger live set ups – with VJ Subrihanna of Function Level Marker, for example. Image and sound as a shared experience, exploring the boundaries between club, pop music and audiovisual installation. New studio material was finally released last fall with the album "Drums."

On the album, Red On establishes a multilayered, collective sound cosmos and explores his interest in acoustic drumming and layered rhythms in greater depth - elements that also characterize the audio/visual live performances with Subrihanna. Lofi pop sketches emerge from eruptive post-rock jams. Live techno, a loud krautrock posse, a jazz ensemble, or very focused noise music. As part of these live shows, as well as in various music videos, Subrihanna collages contributions from other artists with video synthesizer images, collects multi-layered material and creates a visual world for Red On.

The OAE
Suddenly awake, shook from the dream, you lie breathing, sweating. Your dad said there was nothing in the cupboard but, there it is, you hear it, oh god, you hear it again. Panicking under the sheets, you peep out to see the door cracking open and an awful light streaming through the gap. The beams are slowly split by dark splinters, turning clearly into claws. And as the growling increases, the door spills out its contents revealing... The OAE, a party-noise duo from Steinfurt. Julius Menard and Ross Parfitt play sounds.

MARIJE VERMEULEN
Marije Vermeulen ( 1976 Delft NL ) makes paintings, installations and wallpaintings. Lucidity, color and energy are important elements in her work. The clean-cut divisions, forms and color combinations find their origin in reality, which is transformed and evolved through an elaborate sketching process. This process consists of strict actions like taking measurements, halving, tilting and repeating. Collecting lots of possibilities and deducting back to just one option is the game. Together with the associative use of color and playful variations, Vermeulen creates both unpredictable and solid works. There is an obvious link with modernist art traditions, like pop-art, minimalism and concrete art, without being strictly anchored in them. Vermeulen turns stringent rules and restrained execution into exuberant and dynamic works of the present.

GUIDO NIEUWENDIJK
Unambiguous - Ambiguous. Opposites that make one. Guido Nieuwendijk’s (1967 Auckland NZ) works are both and that’s where the tension happens. Unambiguous is what you see at first sight. His works are bold and lucid. Painted in sharp contrasts and often in bright colors. As a viewer, you get the impression that what you see is what you get. But that’s only on the surface. While looking longer, the boldness of the work starts to fall apart. It gets ambiguous. The suggestion of lucidity is contradicted by the looseness of the design. It’s a balancing act of forms, colors and subject-matter. This subject-matter is about asking questions, like “What happens if…” 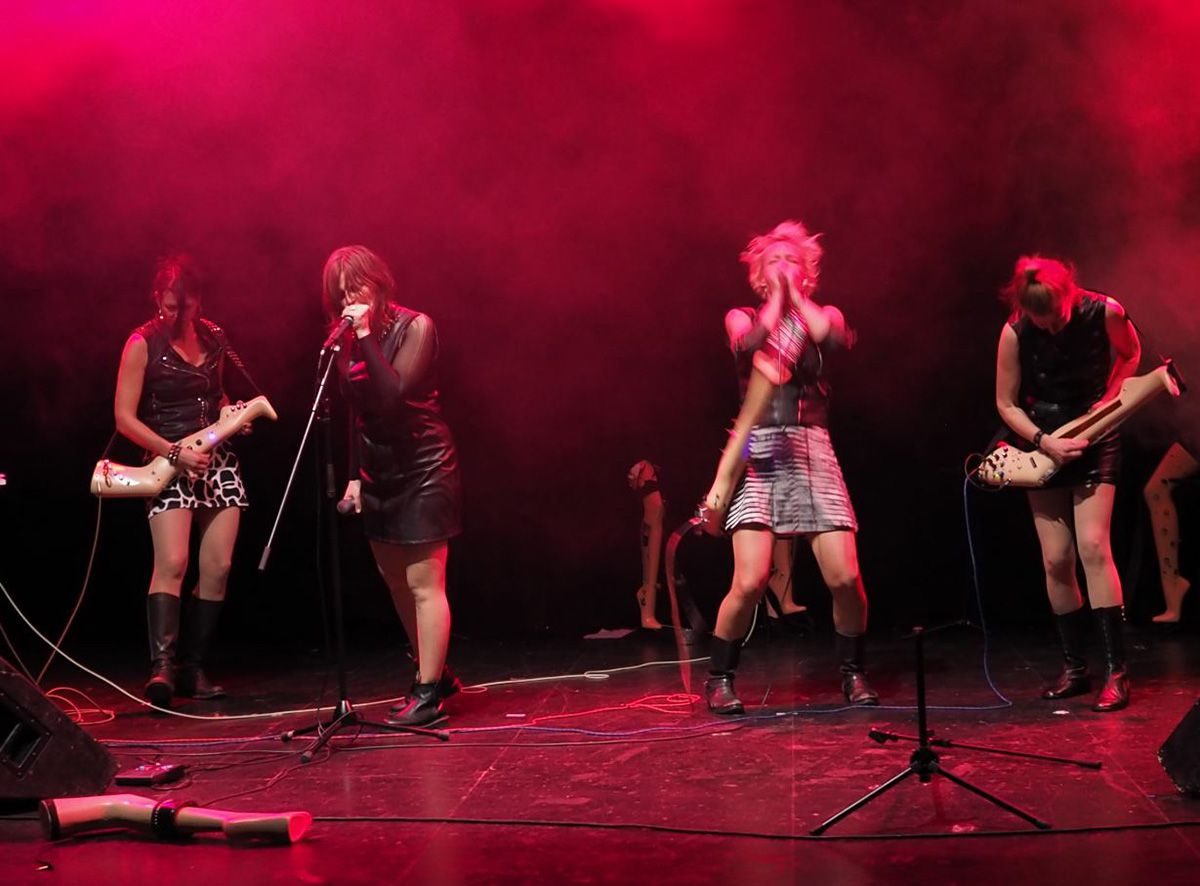 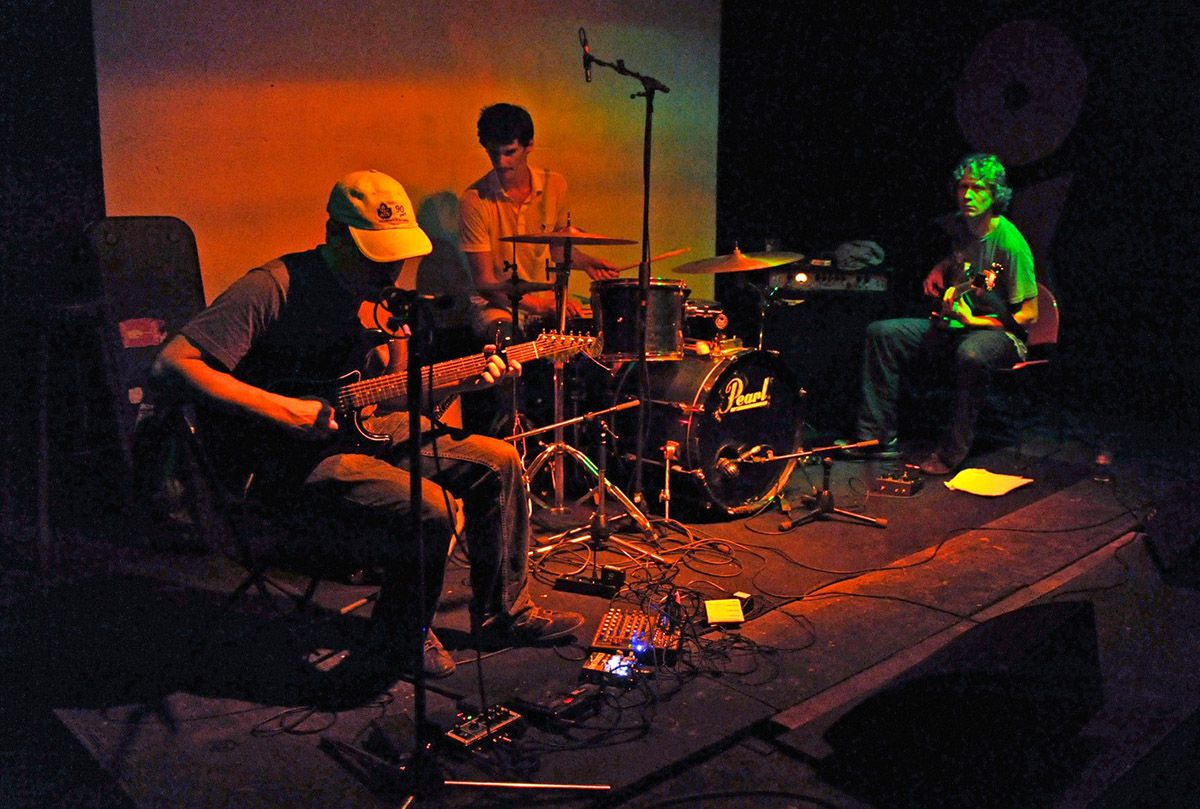 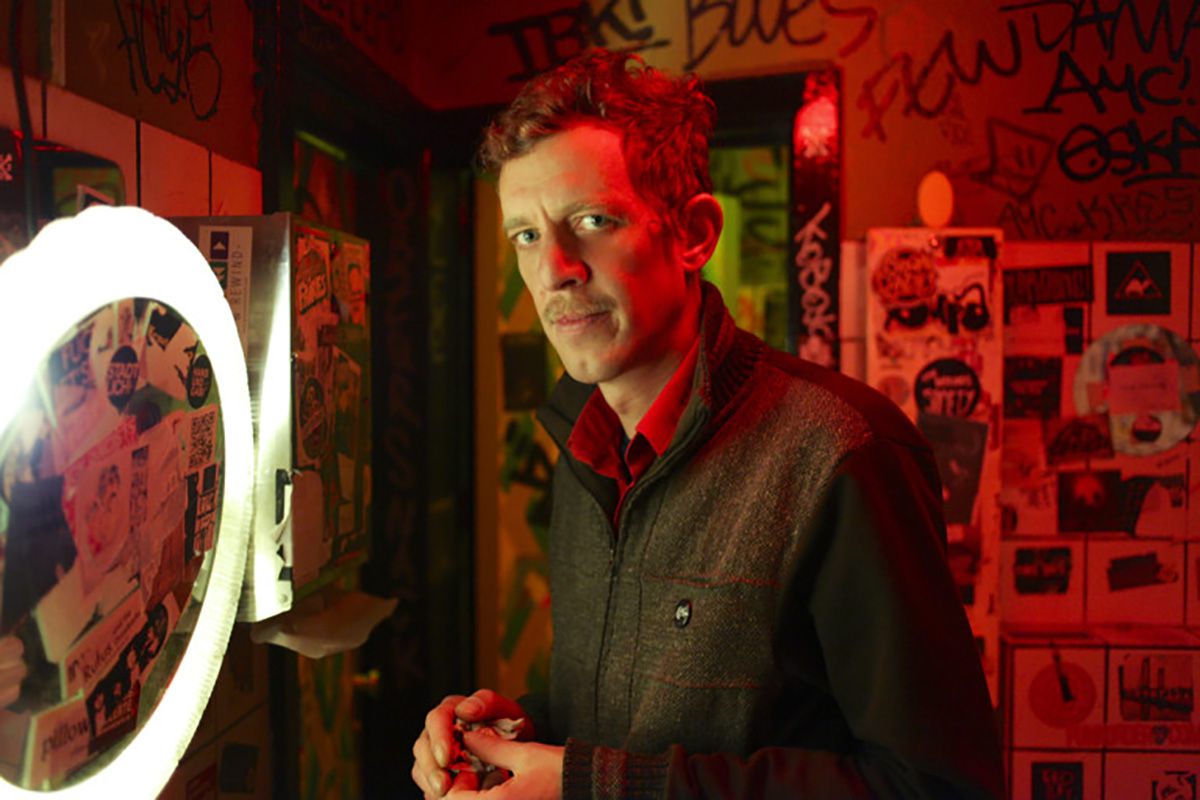 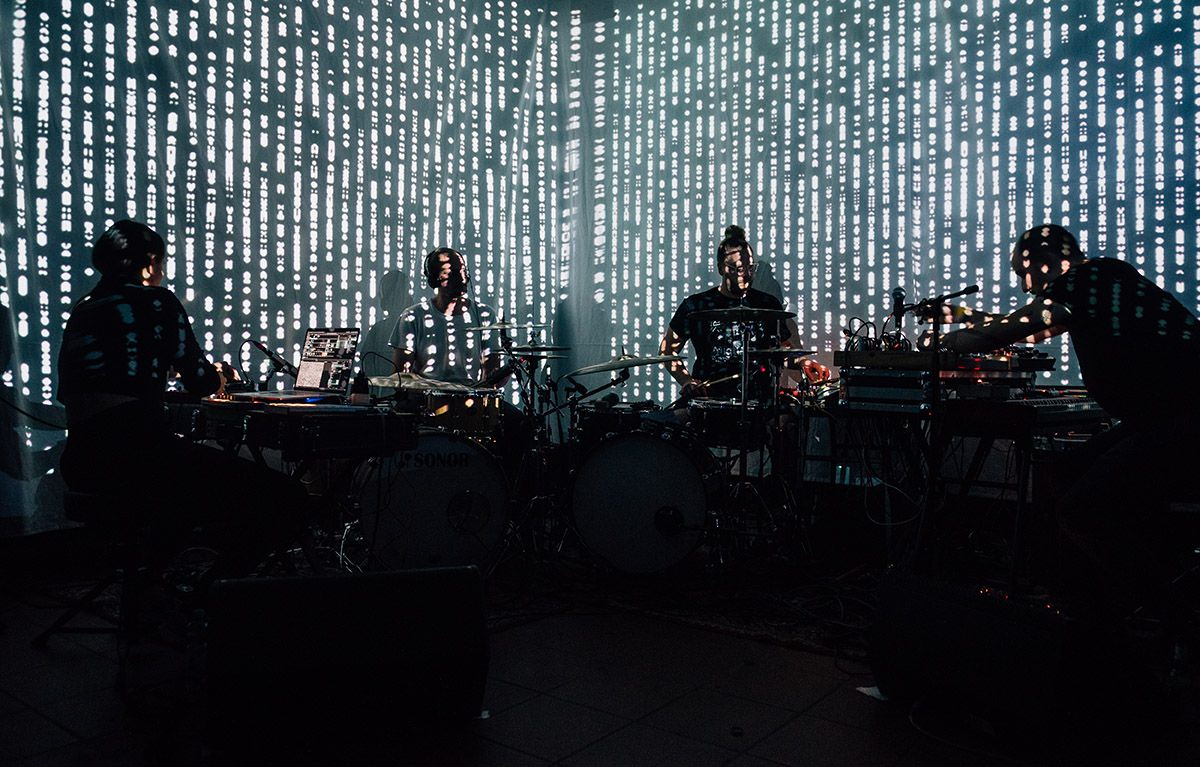